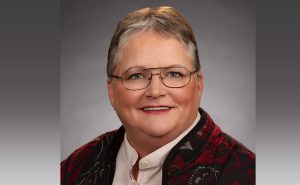 Prior to becoming an attorney, Jeanne served in the U.S. Coast Guard, attaining the rank of Senior Chief Boatswain’s Mate before retiring after nearly thirty years of both active duty and reserve service. While in the Coast Guard she served on cutters and at search and rescue stations, and was a law enforcement instructor with PACAREA Training Team One.

Jeanne graduated from Texas Tech School of Law and has been a licensed attorney since 1997. After law school she was a law clerk to the Honorable Brian Quinn on the Seventh Court of Appeals in Amarillo, Texas, before entering private practice.

In addition to practicing law, Jeanne spent two years as the host of the radio talk show “By the Back Fence”, which explored consumer and financial issues. She also serves on the Board of Directors of Orion Online Learning, which provides K-12 learning in a self-paced, online curriculum.

A native Texan, Jeanne enjoys living in West Texas and listening to Jazz.

You can see her on this 1984 U.S. Coast Guard Commercial, stating: “In the Coast Guard women do the same jobs as the men do, even tough rescues at sea”.